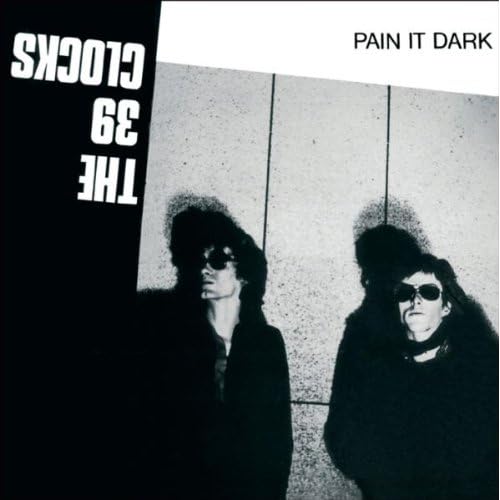 From SubPop.com
The first public appearance pairing Christian Henjes and Juergen Gleue (inspired by and with names derived from LSD-25, they would become CH-39 and JG-39) was in 1976, at the Dada Nova (a space occupied by Otto Mühl’s AAO commune) in midtown Hannover, Germany. Dada Nova would be a space of enduring clash. From the subtlety of a shat upon organ to the ejection from communal meetings by bodily force, the AAO would display that the presence of the 39 Clocks was one of their constant grief.

Known for pranksterism and the destruction of the clubs in which they would perform, friction in every form would continually follow the band. In 1979 they were thrown out of a show in Kassel at Dokumenta (their sounds had disturbed Joseph Beuys). They created an outrage (they wrote a tune with the title “Art Minus Idiots”) at the Filmtage Hannover with their avant-garde Super 8 movies made under the disguise of director Zachius Lipschitz. Rumour claims that at a Hannover show at the Cafe Glocksee, they played the vacuum cleaner and a circular saw instead of guitars, and there was even a knife throwing incident in Bremen.

Inspired, then, clearly, by protest in the broadest and most romantic sense (they wrote a tune with the title “Radical Student Mob In Satin Boots”) theirs was a sound attuned to classic American Punk / Nuggets. Although, this is not Bomp Rock; theirs was a thrust that purposed deconstruction and reassembly in the most modern sense. This collection was put together with the non completeist in mind (originals of some of these records are as rare as Italian underwear), intending to display the general 39 Clocks vibe, but also some of their more curious wrinkles. And as the Clocks were always interested in where they were going and not where they’d been, the chronology here is strictly reversed. Diedrich Diedrichsen wrote the first review of the band (in Spex), and we at DeStijl are very pleased to have had him scribe liner notes.