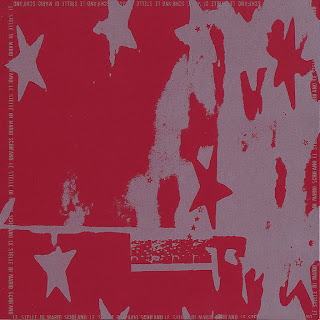 From Scaruffi:
Italy's main contribution to the psychedelic era was Le Stelle di Mario Schifano, a musical event put together by decadent-futuristic pop artist Schifano the same way Andy Warhol put together the Velvet Underground. They improvised a cacophonous 18-minute jam, Le Ultime Parole di Brandimarte (with the instructions "to be listened with the TV on and no volume"), off their only album Dedicato A (1967), one of the most experimental tracks of the time.
After a few seconds of voices and noises, someone intones a fairy-tale madrigal. It lasts only one minute, after which a fibrillating mass of sounds and percussion invades the stage. There is no reference melody, just a shrill keyboard being played rather childishly, like everything else. After eight minutes, a guitar riff becomes dominant, despite the general chaos. The tribal percussion gets louder. The organ distortions duel with the guitar. Each and every instrument competes for sonic space the way wolves compete for the flesh of the dead prey (here the "dead prey" being classical harmony). After sixteen minutes, the guitar restores a bit of order and intones a solemn theme, but it is already the end.
The rest of the album pales compared with this masterpiece. Emotions surface in Susan Song, a madrigal accompanied by a pastoral flute and a distant piano. Intervallo is more or less a Bob Dylan-esque tirade a` la Rainy Day Women minus the words.