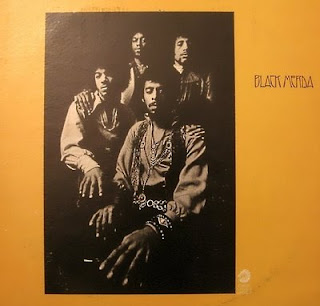 http://en.wikipedia.org/wiki/Black_Merda
Black Merda (pronounced “Black Murder”) is an American rock band from Detroit, Michigan, active from the mid 1960s to the early 1970s and reuniting in 2005. They are considered to be the first all black rock band. The core band members are guitarist Anthony Hawkins, bassist VC L. Veasey, and guitarist Charles Hawkins, plus original drummer Tyrone Hite. Hite was a native of Detroit; the Hawkins brothers and Veasey were all born in Mississippi and came of age in Detroit.