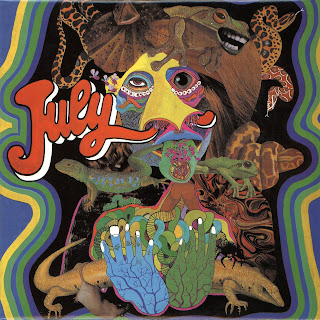 From http://theredhippieteenager.blogspot.it/2012/04/july-july-1968.html
July is the First and Only Album by the English Psychedelic-Rock Band July.
For a number of years it was thought that the Band originated from a group called The Playboys. They originated in fact as The Dreamers who played much in the style of The Shadows and The Everly Brothers. With the success of R&B they changed their name to The Tomcats, drinking from the Sounds of Chuck Berry and Bo Diddley. In 1965 another Band called Second Thoughts came to an end (Their Lead-Singer Patrick Campbell-Lyons going on to form the Band Nirvana). From the ashes of this to Bands, The Tomcats were re-formed. With the lack of success in London the Band decided to relocate to Spain, where they performed on the best Venues the Country had to offer (In Madrid, Barcelona and the Canary Islands). They also released a number of EP's that were quite well received there, getting to the Spanish Charts. With the return of the Band to London and the creation of new Material influenced by Psychedelia. Soon after the definitive change to the name July, they got a Recording Deal with Major Minor Records and a Management Deal with Spencer Davis. Their First and Only Album came out that same year (1968) and was completely ignored by everyone except for some critics who deemed it a “complete waste of plastic”, They broke up right after the release. However many of the Songs were later used on 60's Compilations and the Album itself has been re-issued a number of Times. It is one of the most sought-after Psychedelic Albums ever.
Best Tracks - “My Clown”, “Dandelion Seeds”, “Jolly Mary”, “You Missed It All”, “The Way”, “Move On Sweet Flower”, “Crying Is For Writers” and “Friendly Man”. A fantastic example of British Psychedelia. Pure Psychedelic-Rock without that annoying Pop tinge that affect most Obscure Psychedelic Albums.