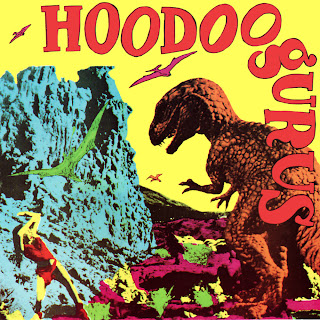 Australian garage rock band who were very successful in the 1980s to the mid 1990s.

From ratb0y69 blog:
Stoneage Romeos was iconic Australian rock group Hoodoo Gurus' first album (released 1984) and saw them receive record sales to complement their already strong reputation for live performances. The album name is from a Three Stooges short film. With radio and television support for their third single "My Girl" (1983) (complete with a film clip about a greyhound of the same name), the band's following grew. The album's other singles were - "Leilani" (1982), "Tojo" (1983), and "I Want You Back" (1984). Later in July 1985 they took the honours in the 'Best Debut Album' category at the 1984 Countdown Awards.

The Australian LP sported a cartoonish nod to the 1966 caveman flick One Million Years B.C., all menacing dinosaurs and Day-Glo colors (designed by Yanni Stumbles); whilst in America, consumers got a stylized sleeve featuring arty renditions of the giant reptiles. 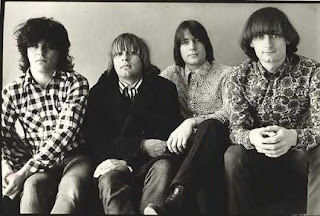