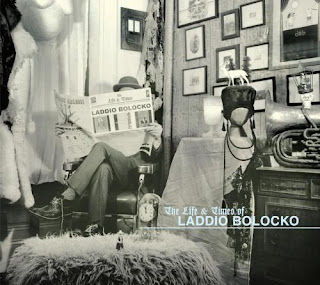 "Imagine Brian Eno wandering into a studio with Can and Don Caballero, the lot of them cradling drones and textures, sounds that swirl in circles, stop in one place and then flit the opposite way. Horns that arc like whale calls and guitar bleats like sirens, beats that are too complex to be human but too graceful to be a machine. Picture all those things knotted into a sonic tapestry that's jarring and mesmerizing at the same time, beautiful and confusing, comforting but somehow unsettling. You'd be approaching what Laddio Bolocko created over their short lifespan, but not quite doing it justice. The New York quartet formed in the late '90s and split in 2001, releasing three discs you'd likely have come across only if you saw the band live. Which, anyone who did will attest was akin to walking in on the Aurora Borealis captured within the walls of a dive bar - beautiful, captivating and wonderfully overwhelming... Altered states suit it best, but Laddio's music essentially provides it's own headtrip" - CMJ New Music Monthly